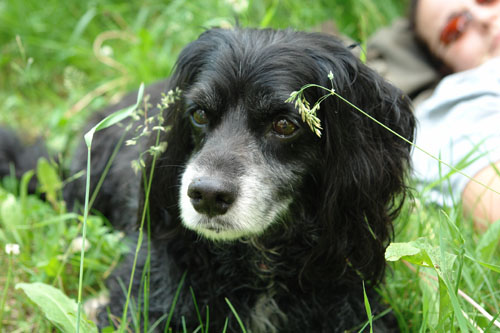 Sometime in 1992 (possibly 1993 since it is hard to remember so far back) a funny looking puppy was born into the world.

Merlin (Bassett /Cocker Spaniel mix) came from a litter of 13 puppies and he was black with long soft ears.  He had the body shape of a Bassett hound and the hair of a Cocker Spaniel and would trip over his long ears as a puppy.

But alas he was no ordinary dog due to magical candy stealing powers and he was soon named Merlin.

Candies would magically disappear from the candy dish and his human “brother” Chad was often blamed.

At 9 years of age Merlin moved to Calgary with his old “dad” Rick and new “mom” Val.

He traveled everywhere with his family including Alaska in 2002 and recently to Anaheim California in 2008.

He loved to cross country ski with Rick and Val and would run ahead to Rick and then back to Val with his snoopy dog ears flying straight outward at 90 degrees from his body.

Merlin even tried the hot tub at his Aunty Chrisy’s in Kamloops.

In later years his most favorite spot in the yard was the pond which eventually became named Merlin’s pond.

He was met there by all of his friends both animal and human including Griz, Ed, Grandpas Oliver and Steve and even Ron Manz who loved Merlin because he was such a gentleman.

We will all miss Merlin and our hearts are heavy with grief.

We take immense solace in the fact that he did not suffer, and passed over in our loving arms.

He will be happy in the ever after by Merlin’s pond, where he will faithfully guard his back yard from those darn squirrels.