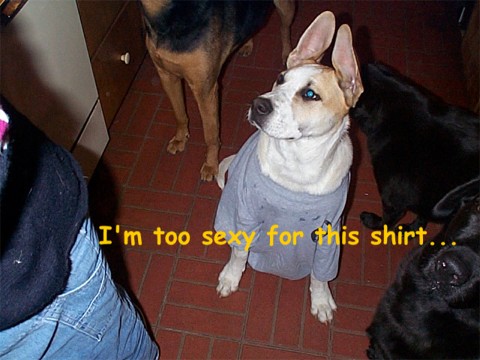 This is in memory of our dog, Maxwell; aka Maxypants; aka Max; aka Picachu; aka Peak; aka Panties.

Max came into this world without much of a chance. Born of two dominant breeds: American Staffordshire Terrier and Saint Bernard, he quickly found his first home at the Carlsbad Animal Shelter. My wife Robin and I met him there on a rainy day and instantly fell for his lovable squirmy antics.We took him home and made him part of our lives. There were many happy moments with Maxwell that we will hold dear including incessant licking of our faces, non-stop tennis ball chasing, dancing on the hassock in our living room and for the most part being an enjoyable member of our family.

We were filled with grief as time went by and the dominant aggressive instincts of Maxwell became uncontrollable. Consultations with several vets and many subsequent training attempts later we were forced to admit that to preserve the safety of our family and those around us — for Max’s life was to be a little shorter. As the loving side of his nature burned away in the flames of aggression, we no longer had any choice but to send him on the journey to the Rainbow Bridge.

We hope that he has rediscovered his joyousness there and that he never wants for a tennis ball or a sunny day. Goodbye Max: I, Robin, Kingbear, Barney and Sampson all love and miss you.