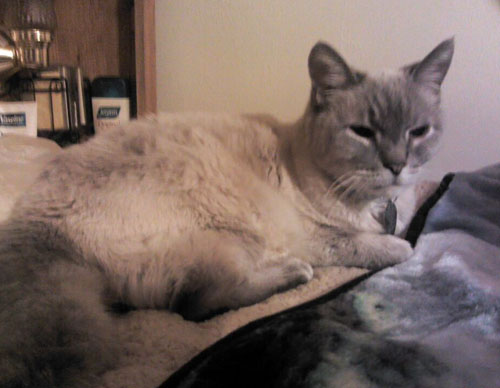 I lost my beloved cat today, Thursday Feb 21, 2013, my friend ….to cancer. My little guy was so full of cancer I had no other choice, but to help him on his way to being free. one of the hardest things I have ever had to do.

He was a cat of many names : Sam, Sammy, Samal, Samual …. he answered to them all. He was one of the most gentle, loving , talking, cats, I have ever known….

He has only been gone a few hours and already it is almost unbearable to be here with out him without hearing his meowing ….. which always sounded like he was saying “now, mama, now.” I love that old cat and his absence is going to leave a huge hole in my heart.

Sam was a mixed Siamese breed, with beautiful blue eyes, as far as I can tell, he had really thick, dense fur, that felt like chinchilla fur.

Not real sure just how old he was when I found him in a 55 gallon trash drum, where someone had threw him away like a piece of garbage. He was so tiny he fit in my cupped hand and barely had his eyes open…that was in the last days of April, so when I got him to the vet in a few days …. that was May of 1996.

He was 17 and would have been 18 years old in May of 2013. He now is at rest in my back yard with another cat I had the died at the age of 13 years …. under a bunch of white pines, where there is a huge rock to sit on and statues of deers. A peaceful place.

As far as I know he had a good life with me, he was never hungry, mistreated, and very loved…. He is survived by one other cat Nippley, a Lynx point Siamese, she is 16 years old.  As much as they romped and played over the years, I’m sure she will miss him to.  So I guess we will both be sitting here missing him together.

I woke up this morning, my heart was filled with pain;
When I realize I would never see you again.

Never to hear your vocal meow,
That sound just like you were saying, “Now Mama Now.”

Never to stroke or brush your silky fur;
Just makes my life a total blur.

You were such a gentle, sweet, and loving friend;
I really hated to see it end.

I am going to miss you very much, my little guy;
You gave me many years of friendship, Please excuse me while I cry.

I hope you are now sitting in the palm of God’s hand;
Health, happy, and whole, or at least that was the plan.

Nippley, and I will be here missing you;
Until our time to leave is due.

We will get to see you some other time again;
Until then, goodbye, my sweet and loving friend.