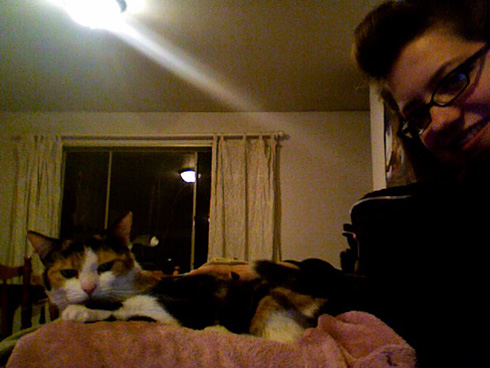 I had been trying to get her to eat anything, but she just wouldn’t. We went to the vet that night. They told me she had liver problems and so on and so forth.

I got Pebbles when I was 7 years old. She was a gift from our next door neighbors. She was my very first pet, and I was allowed to pick her out of the whole bunch. She was the only cat in the litter with such pretty spotted fur. All the other cats were gray or black and white. But Peabo was different.

She’s gone through many different houses, and many different living situations. From being the only cat in the house to having a friend. And eventually the dogs came along too.

Peabo has been through thick and thin, she has survived accidental hangings and running into walls, and putting up with the overwhelming amount of attention I gave her over the years. If I could go back in time, I would never have done any of those things that I did to my cat. But I think overall, she still lived a good life.

I will always cherish the memories of her chasing my feet under the blankets at night when she was a kitten, and the few rare times when she actually wanted to sit on my lap and I was able to pet her. I will never forget this past year that she has been able to live in my house when I moved out of my parents house.

I am so grateful that my landlord let me bring her up. If I had known she was going to die so soon, I would have brought her up even sooner.

I love you Peabo. You were the best cat a girl could ever ask for. And you are very very missed.

Even now, that 6 months have passed and I have a new cat, I cry just thinking about you, and I think about you constantly.