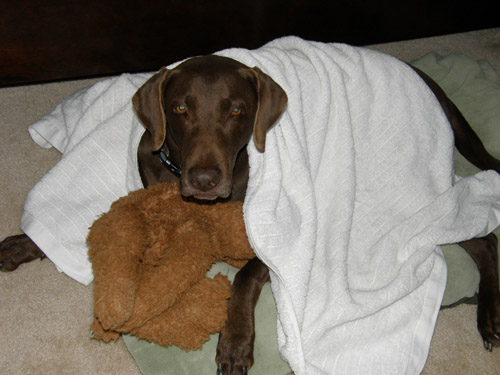 Our dog Hank (Chocolate Lab & Weimaraner mix) was a great gift and light in our lives. His unconditional love for us and everyone he met, captured hearts.

He loved water and getting baths in the front yard with the water hose. People would stop and say, “I’ve never seen a dog stay so still when getting a bath.”

His Weimaraner instinct came out when there was a cat, bird, or bunny around, he would make a made dash and try and catch them.

He would miss because they were so fast, but he would smell around with one leg up and his tail pointed towards his head. He was ready to be a hunting dog. Daddy was going to take him hunting with him this year for the first time.

He learned to sit very fast, but he just hated to lay down. So we would tell him “Outside” to make him lay down because he hated going in the backyard since he didn’t like to be left alone.

When cooking in the kitchen he would come to close, and I would say, “Uh-uh, back it up” and he would slowly get out of the kitchen.

Hank loved to be petted, it didn’t matter what you were doing to him as long as you were petting him. We would be laying on the couch and he would nudge his head underneath your arm to say, ‘pet me.’

At the end of May, Hank vomited and started having diarrhea while we were all on vacation. At first it was bloody. I read online lots of tips, don’t worry, just try some simple remedies.

I just thought it was from the stress of not being at home. Soon it just became watery stool and I went to the vet.

The vet tried one medicine, it helped for a couple weeks, but then it came back. Two more medicines this time, a couple more weeks he was better, then it was back.

Hank has now lost 20 lbs. Not enough stool for fecal samples, so took bloodwork and it didn’t look like anything serious like cancer or such. Good news, I thought.

We tried medicine one more time. Was better for a little bit, then it was back. This time I was serious, I was going to a specialist. Tuesday, meet with internal specialist, still unclear on what it is, so many possibilities.

Hank is now 30 lbs. less than his normal weight. We opted for treating with 3 different medicines hoping it was a highly resistant bacterial infection. On Friday, Hank was acting funny so I took him in and he had a seizure.

It only lasted a few minutes and then he was fine. We tried another approach, steroids and anti-seizure medicine. He slept all day Friday, then that night he had so much energy it was crazy.

He had solid stool. Yes, I was so excited, we finally beat this thing, whatever it is.

Saturday we had a good day. I stayed with him all day and worked on the house. I tried to make him lay down and save his energy but he was insistent on following me around. He had solid stool again.

Sunday was good, but Hank started pacing, I let him outside and it was back to diarrhea. I felt so defeated. I was determined to try one more treatment. This time for fungal infection, on Monday.

Though, Sunday night, Hank started to have really labored breathing, and he wouldn’t lay down and kept pacing. It continued.

At about 2am he laid with us in our room, but he was still breathing very rough and he moaned. I knew he was hurting and I thought this was it.

We got ready and took him to the emergency vet. The night vet said he was stable enough, getting enough oxygen, that he didn’t need help. But we decided for him to stay there until our specialist got in the next morning to see what she says.

At around 7:30 a.m. I got the call. Unfortunately, she thought Hank was in pain and our best option was to let him go. I asked her, can’t we try this treatment and see if he gets better?

At best, it would take almost 2 weeks to see any results, Hank didn’t have 2 weeks. We made the toughest decision of our life and let him be at rest.

We are so sad and heartbroken that he is no longer with us, but I know he now rests with the Lord.

Hank was truly Daddy’s buddy and Mommy’s baby. We will love you forever Hank!