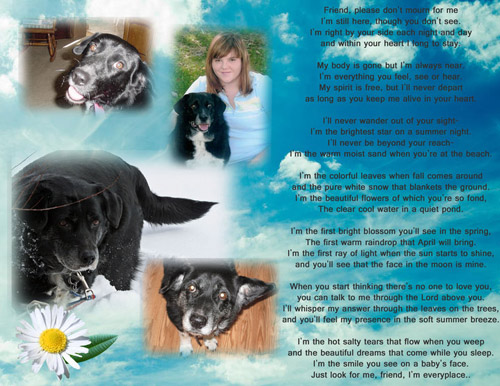 My beloved dog  Sasha (Border Collie Mix) had a small lump at the end of last summer. By November, the vet said it is by far the worst cancer he had ever seen in a dog.

The cancer was not only under the skin but it started to ulcerate badly. It was hard to deal with because the wound would have an oder no matter how much we cleaned it.

But I kept my head up and stayed strong for her. December came and she was scheduled for surgery. They said the surgery was successful, and her ulcers were gone, I it was looking up for the best.

The beginning of January was good. By the mid January, Sasha began having a lot of accidents, and her ulcers started opening.

I felt so bad for her I could tell she was in pain. We took my girl to the vet for her last appointment. I can still remember the blood dripping as we lifted her onto the table.

The doctor was telling us he’s never seen a cancer so bad. As I began to cry, I knew what he was going to say.

A week later, we tried to give her a good week by giving her treats and letting her get some fresh air.

My mother decided we couldn’t let her suffer anymore. As I spent the last few hours with her, I took her paw prints with ink and sat with her.

I said goodbye … I knew she didn’t want to leave me.

My mom and brother went because I just couldn’t bear it. It was done. My mom came home and just held me.

I remember the 1st day I got her on my birthday. Sasha was about 4 when we adopted her in 2001. The Humane Society said they found her roaming in a field. Her original name was Two Socks because of her two front feet.

I never felt so close to a animal before. She was my everything.

When she was scared of a thunderstorm she would run to me and sleep in my bed no matter how big she was. I didn’t care. I remember how much she loved being outside, whether its playing with snow, or out playing in the water in the summer.

Sasha will live in my heart forever. It’s been about 6 months and it still seems like she just left yesterday.

I miss you girly.